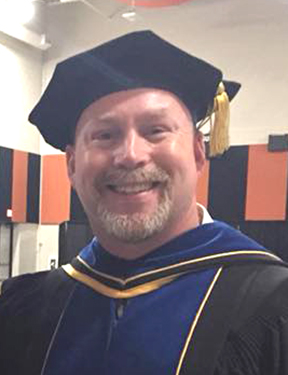 Dr. Brain Kesling has a Ph.D. in physical chemistry from West Virginia University and is an assistant professor of chemistry at Campbell University.

And he’ll be the first to tell you. Chemistry is hard.

“It was the hardest subject for me in college,” he says, “and I’m pretty hard headed. So I kept taking courses trying to figure it out. After college, I felt like I didn’t know enough chemistry to get a job in the field, so I went to graduate school.”

Toward the end of his graduate career, Kesling’s advisor asked me if he would cover a couple of his lectures while he was going to be away at a conference. Kesling agreed to do it and ended up “having a talk” with his class at the end about their unruly behavior.

“Whatever I told them seemed to have an effect, and after my advisor came back, his class was so well behaved that he said I should consider becoming a professor.”

His advisor’s instincts were right. Kesling is the 2020 recipient of the D.P. Russ Jr. and Walter S. Jones Sr. Alumni Award for Teaching Excellence. His colleagues and students tout his work to improve the general chemistry curriculum, which serves as the foundation for further study in many scientific fields. While at Campbell, Kesling has developed a standardized course structure that is similar in rigor to courses at other major universities and which all general chemistry instructors now follow.

He has presented at national meetings such as the Biennial Conference on Chemical Education to share his success in using these strategies.

“At one of the faculty orientations a few years ago, there was a law professor who demonstrated his use of the Socratic method [which stimulates critical thinking], and I was really impressed,” Kesling says. “But I was confused about how I could implement it in a freshman class.”

Kesling’s lectures involve a lot of pre-class reading for the students, random presentations before their classmates [so students feel pressured to come prepared to each class], back-and-forth discussions with students and a lot of Q&A. He encourages his students to applaud correct answers in class, and missed questions are followed up with second chances and bonus questions.

“Once students prepare adequately for class and see that they can do the work, the atmosphere becomes more positive and they are willing to work harder,” Kesling says. “More effort from the students translates to better scores on exams.”

His colleague, assistant professor of chemistry Dr. Evan Reynolds, once overheard Kesling discussing with a student the concept of atomic orbitals and their shapes — a complex subject that many students struggle to understand, Reynolds says.

“Dr. Kesling, however, was able to create a very relevant analogy between orbital shapes and balloons,” he says. “Upon hearing the explanation, the student immediately exclaimed, ‘That makes so much sense now.’

“Even more impressive, the student was not even in his class.”

Kesling explains the satisfaction he gets when a student “gets it.”

“I had some terrible experiences along my educational journey with professors who seemed to take pride in seeing students struggle,” he says. “Helping someone in need is our Christian mission, regardless of whether we are providing food to the hungry or helping someone to understand the course material that they need in order to move on with their career or studies. Seeing students master the material in any of the courses I teach, and then watching them move on to careers in science or graduate programs, gives me the satisfaction of a purposeful life.”