A movie or a theatrical production isn’t worth the price of admission if it doesn’t evoke a certain amount of emotion in its audience.

This wasn’t always the case, according to Campbell Associate Professor of English Dr. Eric Dunnum. Playwrights in 16th and 17th Century England worked hard to limit the effect their works had on their audience, Dunnum says, as unruly audiences at that time were prone to riots and violence, and theaters were often the victims of their carnage.

Dunnum’s 2019 book, Unruly Audiences and the Theater of Control in Early Modern London, explores the effects of audience behavior on dramas from early modern playwrights — arguing those playwrights often used their plays to control the physical reactions of the crowd. Dunnum’s layered research has earned him the 2020 D. P. Russ, Jr. and Walter S. Jones, Sr. Alumni Award for Research Excellence. 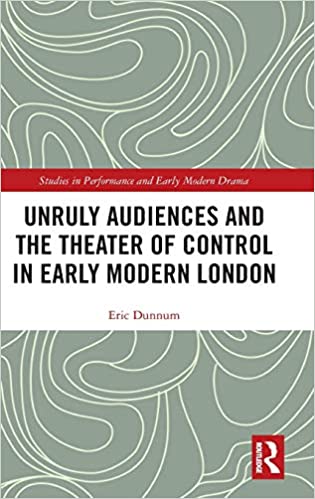 The book was an offspring of Dunnum’s dissertation at Marquette University. He says he was inspired by watching an experimental production of Titus Adronicus that attempted to recreate the interactions between early modern plays and their audiences. The production encouraged audiences to “act more 16th Century” and boo, cheer and talk more during the production.

The audience, however, wasn’t up to the task, Dunnum says. Doing all of that felt too rude.

“This made me start thinking about differences between our experiences with the theater and theirs,” Dunnum says. “I wanted to try to uncover what that older relationship was like. What I found was that it was much more adversary than previously thought.”

Professional drama was more or less invented in England in the 1570s (Shakespeare would arrive about a decade later and turn it on its head), and there was no blueprint for how an audience was supposed to react to what it was seeing on the stage. Emotional productions, Dunnum says, could spark extreme reactions. Often, riots would start in the playhouse. In fact, the playhouse was much like today’s city hall in that it was a popular gathering space for protests, and when audiences rioted, the playhouse were punished or even shut down.

So the playwrights took it upon themselves to control their audiences.

“Today, we like to think of theater or really any art as transformative,” Dunnum says. “After experiencing powerful art, we change our behavior or thinking. What I found is that early modern playwrights were a bit afraid of this power … and for good reason.”

Dunnum points to several riots in the late 1500s and early 1600s — the theaters served as gathering points for many of them, and often the theaters were the target.

“Almost every year from 1580 to 1630 on the Tuesday before Lent, apprentices and workers would riot in the streets and vandalize theaters and brothels,” Dunnum adds. “They archives say they would ‘tear them down,’ so it seems to have been pretty violent. No one knows why they did this. I’m still trying to figure it out.”

Dunnum says the core of his book looks at plays within plays — the “metadrama” — to see how playwrights created fictional versions of performances and then dramatized how they affected fictional audiences.

“What I found is that these fictional plays often have a specific goal,” he says. “For instance, curing a fictional character of a problem — like being a miser or lovesickness — but that goal is almost never achieved. So playwrights regularly staged plays that did not work.”

Dunnum argues that they were trying to train their audience to not expect drama to affect them. They were actively undermining their own plays to keep their theaters open, he says.

“If you know Hamlet, then you know what I am talking about,” Dunnum says. “Hamlet stages a play to ‘catch the conscience of the king.’ Except in Hamlet, the scheme works. This turns out to be the exception. Almost all the other plays from the era that use a similar strategy fail. But because we all know about Hamlet’s ‘The play’s the thing, wherein I will catch the conscience of the king,’ we think it is normal. It is not.”

Playwrights tried to construct playgoing through their drama in the hopes of creating a less-reactive, more pensive and controlled playgoer — much like the movie and theater audiences of today. The result, Dunnum says, was the radical experimentation in dramaturgy that, in part, defines Renaissance drama.

Dr. Sherry Truffin, professor of English and director of Campbell’s Honors Program, calls Dunnum’s book “a bold, counter-intuitive piece of scholarship that is painstakingly researched and convincingly argued, and I expect that it will be widely read, admired and possibly even imitated.”

Dunnum says he hopes his research contributes to the advancement of “what can be known about our world,” even if in a small way.

“We currently live in a world where protests and riots are in conflict with institutions,” he says. “Looking at how Shakespeare and his contemporaries also navigated these conflicts 400 years ago should hopefully give us some perspective and direction.”